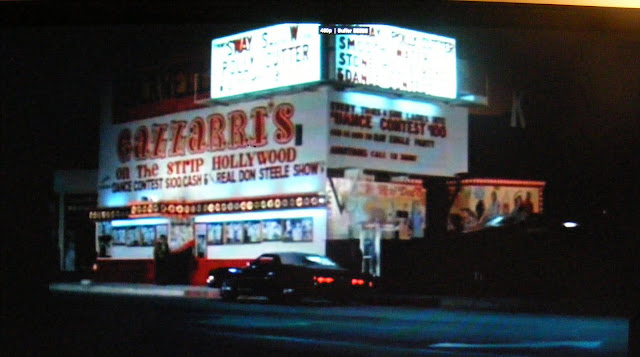 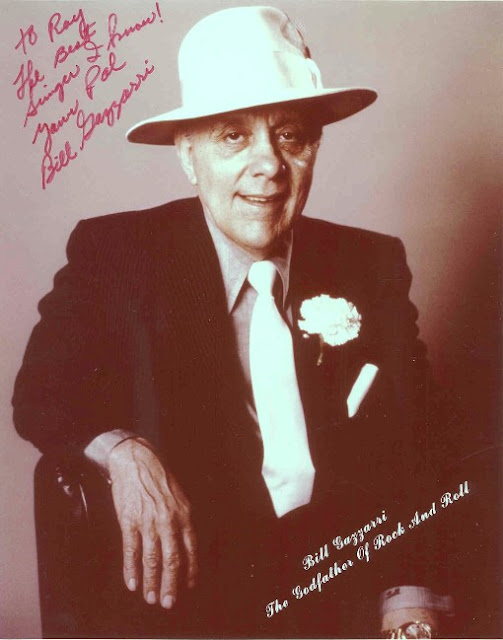 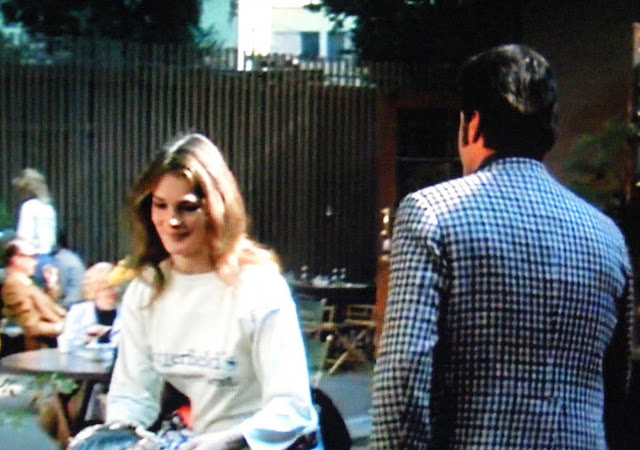 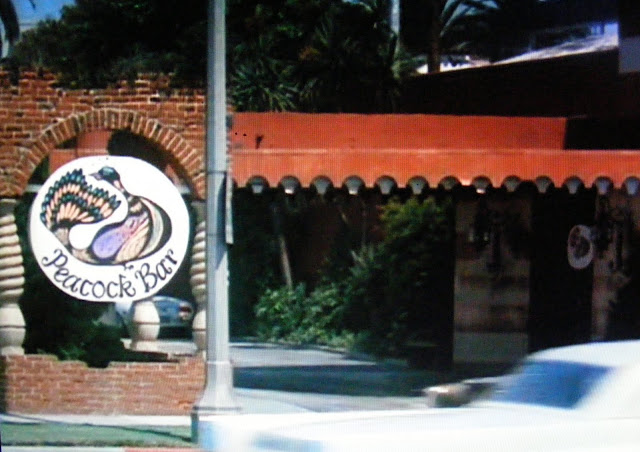 This one we need help with, the exterior shot of this restaurant shows "Peacock Bar" but the interior shots show the wait staff wearing shirts that say "Butterfield's"... Anybody know what the real name of this place is and where it is located or once located?

The Peacock Bar location (at least the exterior shots/scenes) has been identified by Eitan Alexander
In the two below scene photos from a 1971 episode of the TV series "Mod Squad" the exterior of the Peacock Bar can be seen. The name of the restaurant / bar was named the MEDITERRANIA located at 55 / 51 North La Cienega Blvd, Beverly Hills, CA
Today in 2015 it is The Stinking Rose - 55 N La Cienega Blvd but it was recently sold.... 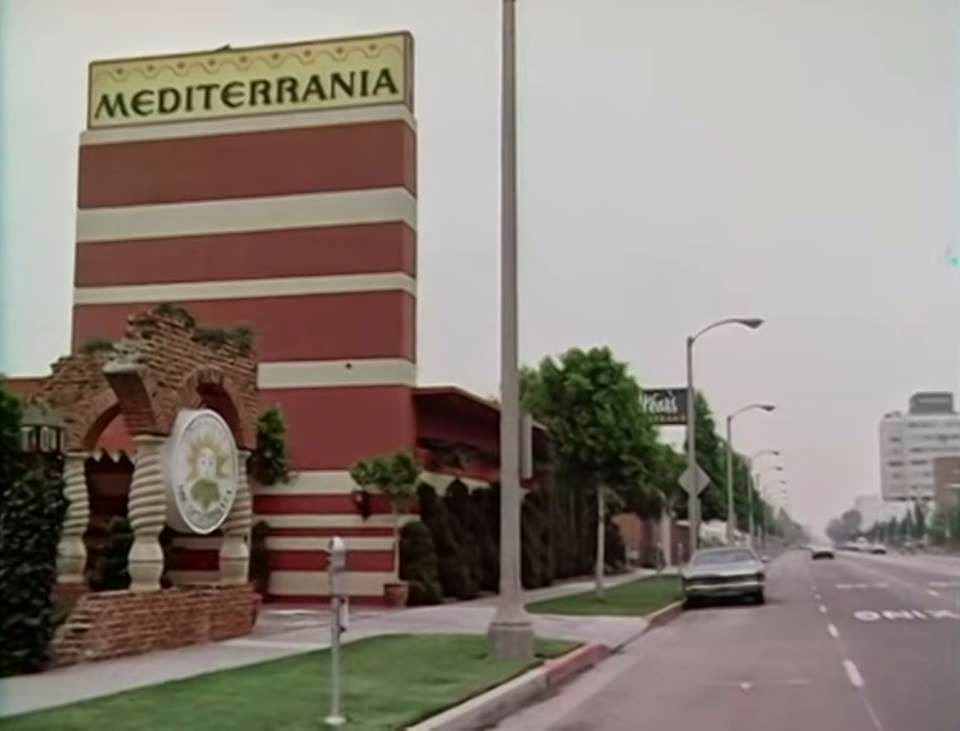 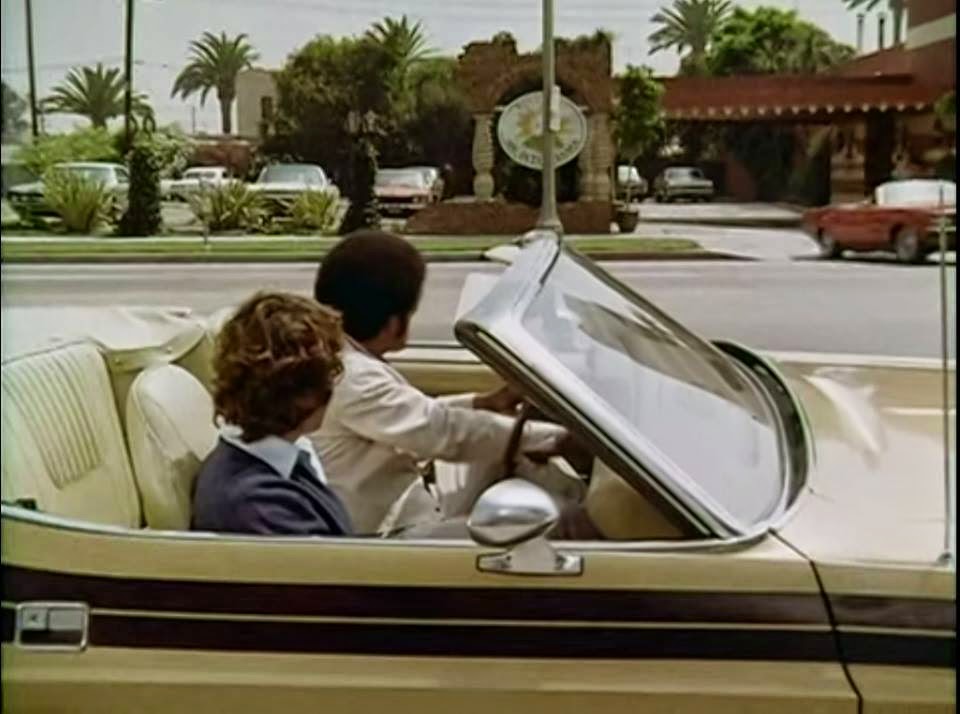 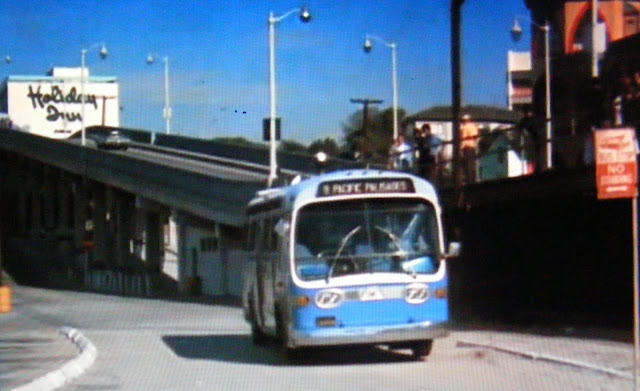 ABOVE PHOTO: The #9 Pacific Palisades bus with the Holiday Inn Hotel in the background 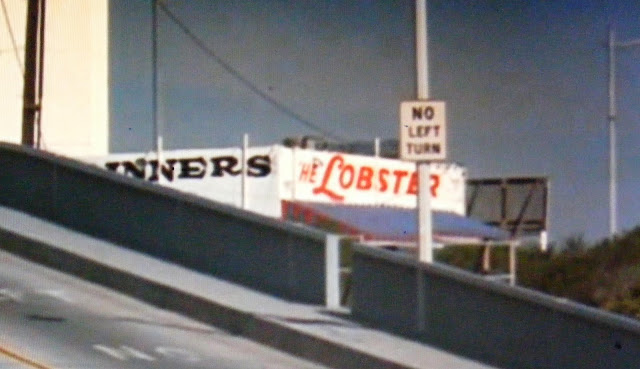 Above Photo: The Lobster Restaurant which was located by the SANTA MONICA BEACH-AT THE PIER (Pacific Palisades) 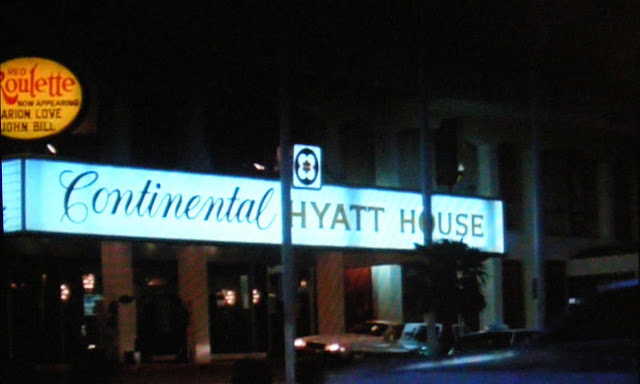 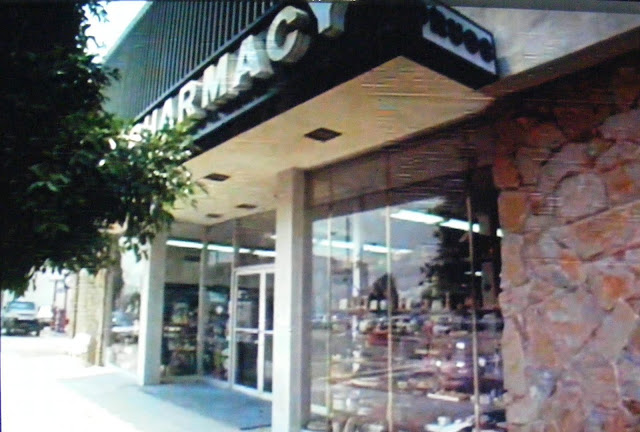 ABOVE PHOTO: Exterior shot of the pharmacy that was once located at 7500-7508 Sunset Blvd 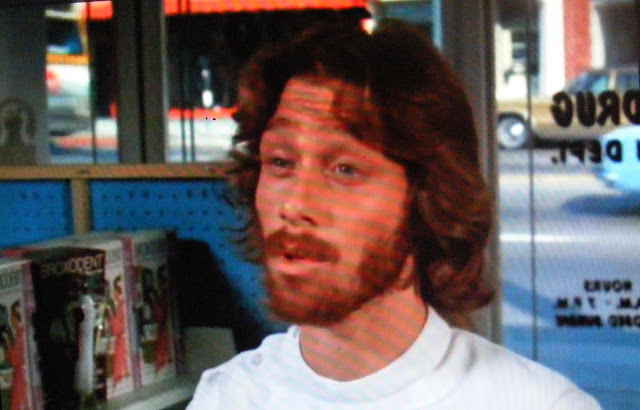 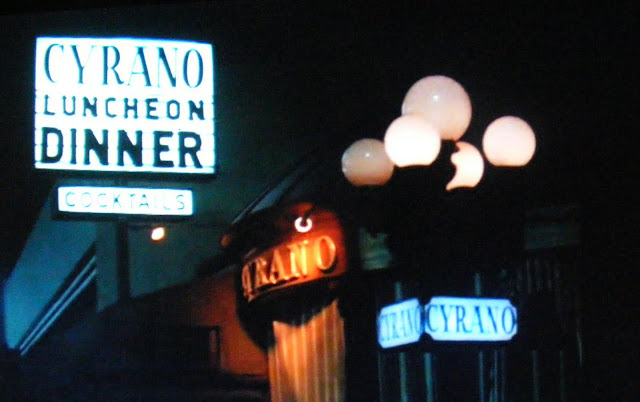 ABOVE PHOTO: Originally I had this location at Cyrano Restaurant: 8840 Beverly Blvd., West Hollywood, CA 90048 but I was corrected by a viewer. This episode was filmed before they moved Cyrano to Beverly Blvd. The correct address would have been 8711 Sunset Boulevard - Thanks to James for that info... his late mother used to work at the Cyrano Restaurant when it was on the Sunset Strip. 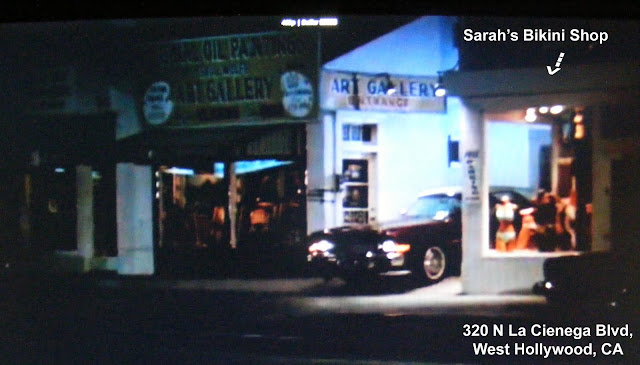 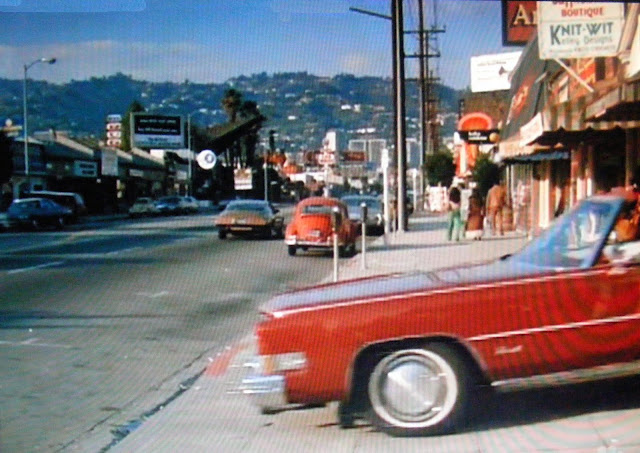 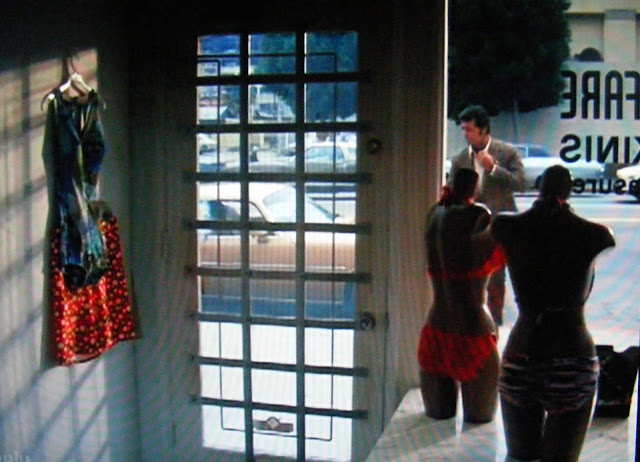 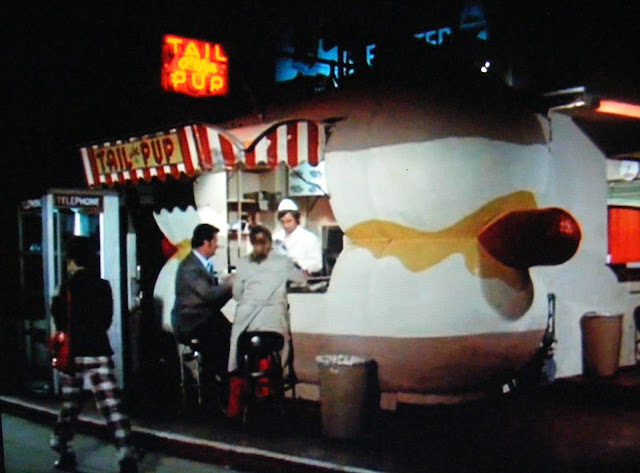 ABOVE PHOTO: Tail o' the Pup - 311 N La Cienega Blvd, Los Angeles, California﻿. The iconic hot dog stand is no longer in use in Los Angeles. It has been saved and there has been talk about bringing it back to the street. 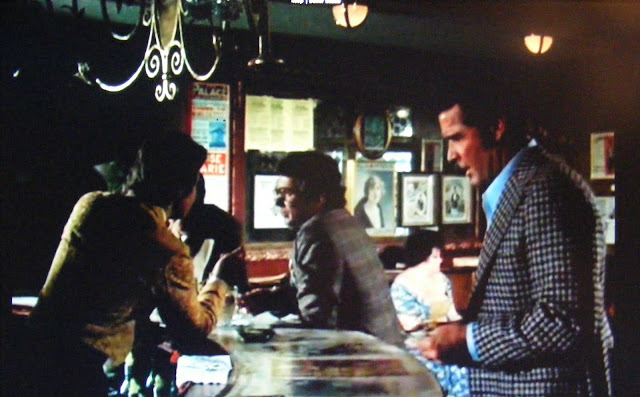 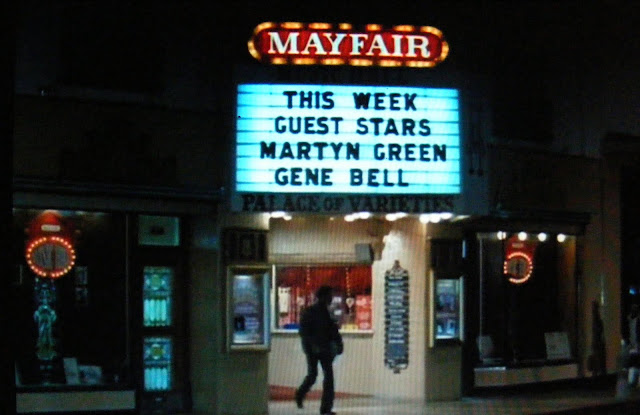 Posted by Rockford Files Tv Show at 6:05 AM

Email ThisBlogThis!Share to TwitterShare to FacebookShare to Pinterest
Labels: Bill Gazzarri above photo who died in 1991, Gazzarri's on the Sunset Strip

I just started watching The Rockford Files on Netflix. Partly because of a love of detective shows and also because I found out they did a lot of shooting in and around LA. I googled Polly Cutter after seeing the name on Gazzari's marquee. Turns out she went on to Sing on the One Day At a Time theme song.

This area (320ish North La Cienega Blvd) was featured in several shots of the Charlie's Angels season 5 episode "Angel On The Line." In that show the back of the Tail O' The Pup is shown. Christian

The Lobster still exists. It's still near Santa Monica Pier...