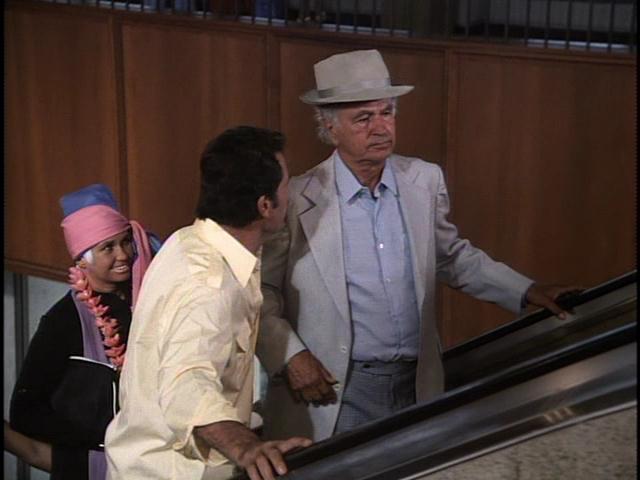 ABOVE PHOTO: First question, WHO SOLD THAT WOMAN THAT OUTFIT??? And being the year 1979 doesn't mitigate the veracity of this question.
In the above photo James & Joseph Rockford are seen in the Honolulu Hawaii Airport after arriving on the island.
BLOOPER: Rocky tells his son Jim this is the first time he was been to Hawaii. But in a previous episode of the Rockford Files - "Dirty Money, Black Light" 1977 - Rocky won a trip to Hawaii and went there only to be subsequently grabbed by the FBI and brought back to Los Angeles California due to a case his son Jim Rockford was working on. 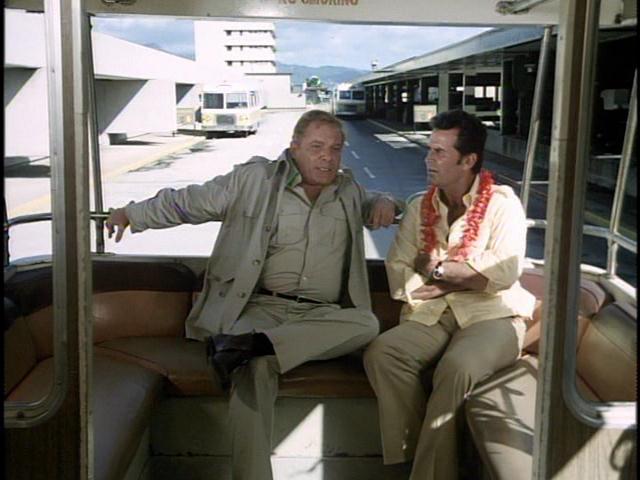 ABOVE PHOTO: Ken Swofford played Col. John 'Howling Mad' Smith who served with Jim Rockford in the Korean War. This was the 5th episode of the Rockford Files that Ken Swofford had a major role in. Ken Swofford was born in Illinois in 1933 and is still with us in 2012. He publicly fought a battle with alcohol abuse in the middle of his career and appears to have beaten it. 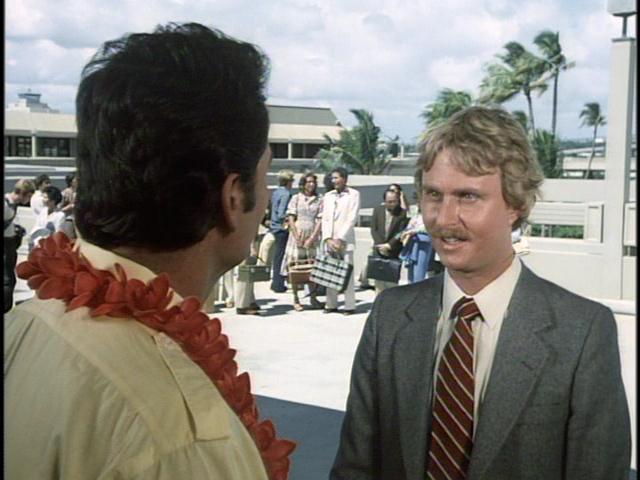 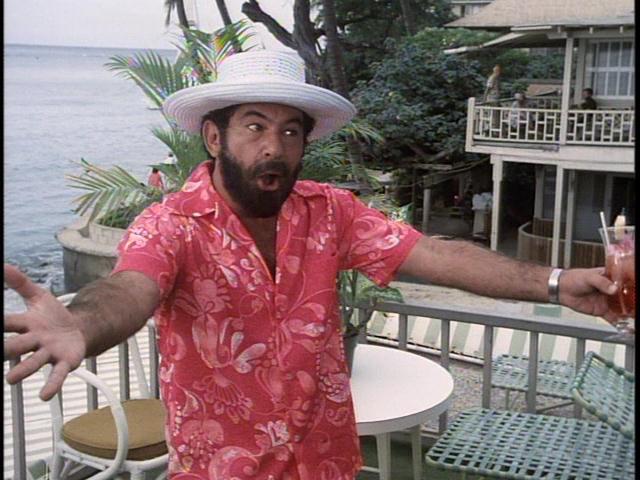 ABOVE PHOTO: Stuart Margolin who played Jim Rockford's best friend Angel managed to be in this episode...A way to get a free Hawaiian vacation and we all know Angel loves anything that is FREE! 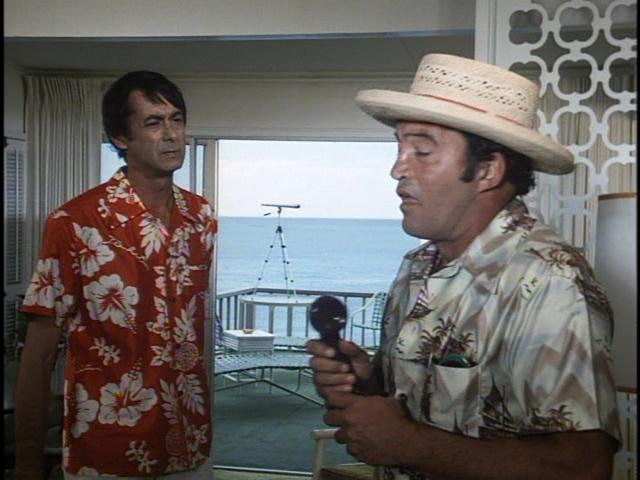 ABOVE PHOTO: Luis Delgado who plays Officer Billings and Joe Santos who plays Lt. Dennis Becker managed to be included in this episode being filmed in Hawaii.
The above hotel room was located in the Hawaiian Village Hotel - This is confirmed by the name of the hotel being printed on the room phone in the below photo. 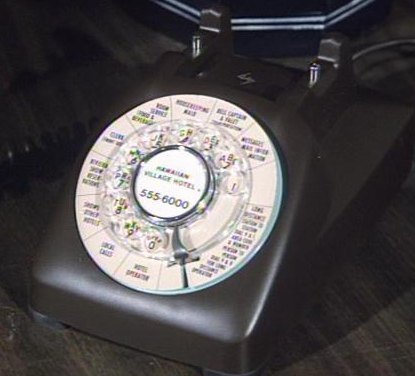 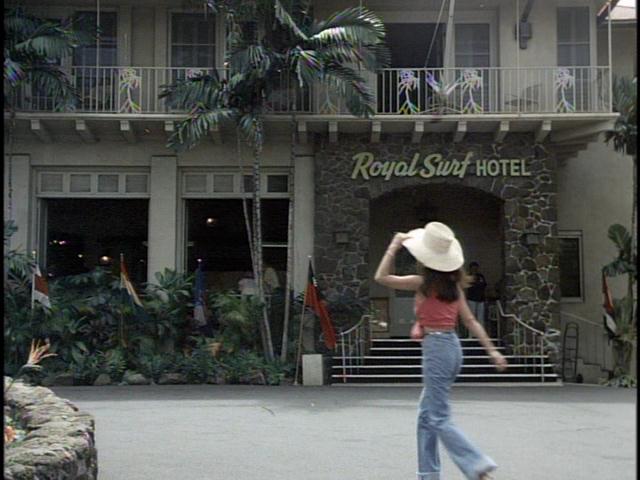 ABOVE PHOTO: The ROYAL SURF HOTEL was the hotel that James & Joseph Rockford were booked at to stay while in Hawaii. As of this date I am unable to confirmed if this hotel is a real location or not in Honolulu Hawaii.


Hello there!  Thanks for the great website!  Here's something to add for you:

Regarding Rockford Files " The Hawaiian Holiday" episode --   The "Royal Surf" hotel depicted in the show was fictional and hotel signage added by the studio for effect;  but the location itself really did exist as an actual Waikiki hotel . . . . it was (and still is) The Halekulani (next door to the Hawaiian Village).

Compare your webpage screenshot of the "Royal Surf" with this old photo of the Halekulani - note the details etc.  This photo is from the 'legacy' section of the current Halekulani website -  http://www.halekulani.com/hotel/waikiki-legacy  -  so I'm guessing that portion of the property used for Rockford was torn down during a subsequent remodel.  The area looks very revamped on google Earth.  But the Halekulani has been there since before the Rockford shoot.

Anyhow, thought I'd pass along the info.
Chris
Thank you Chris for the above e-mail and the below photo! 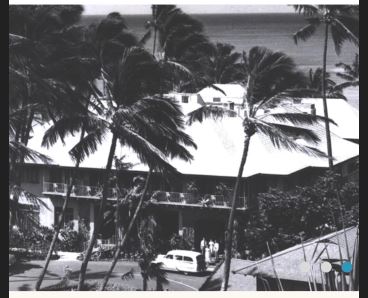 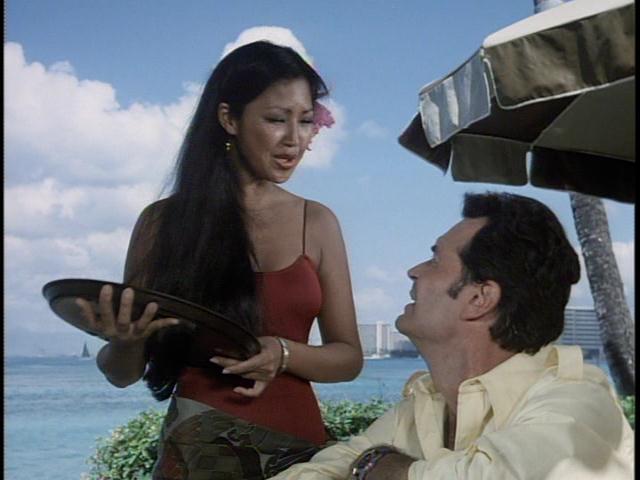 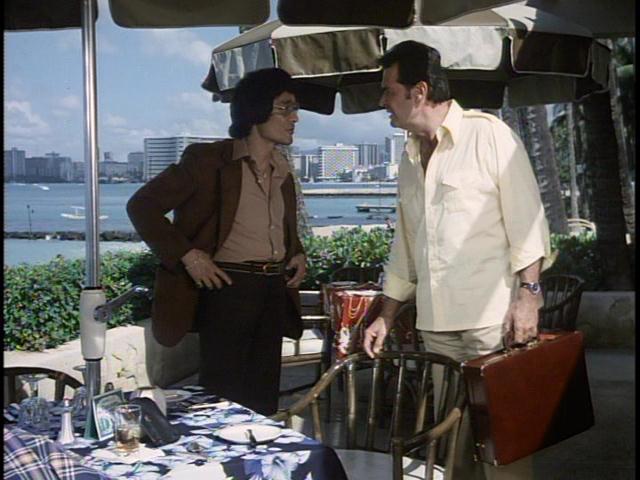 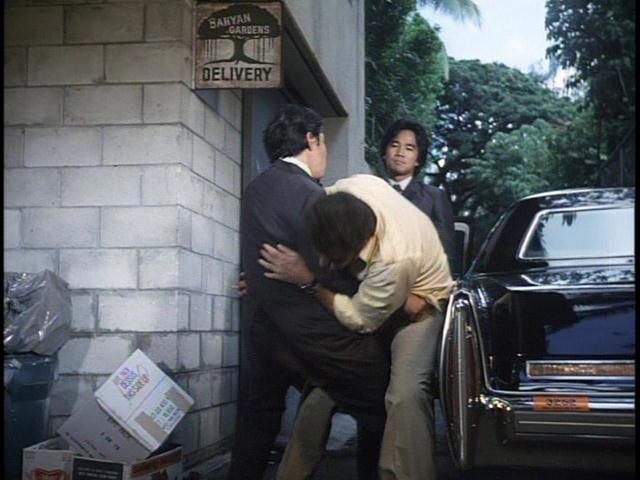 ABOVE PHOTO: Jim Rockford gets attacked behind the Banyan Gardens Restaurant & Lounge
In the above photo you can see the restaurant's name on the sign hanging off the top of the building and in the below photo you can see a  part of the name "Gardens" along with the same tree logo on the wall behind Jim Rockford. 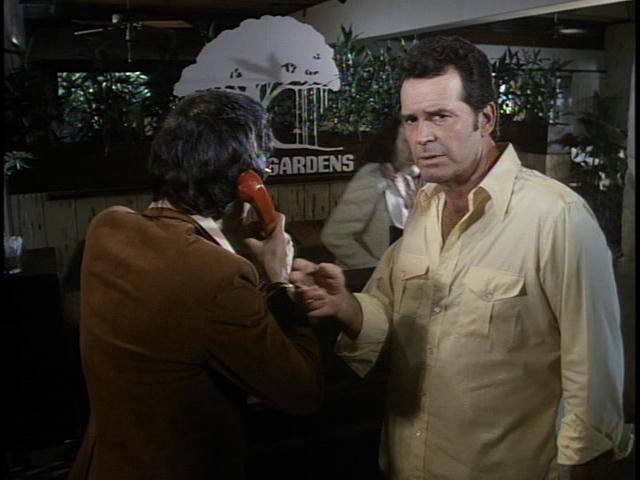 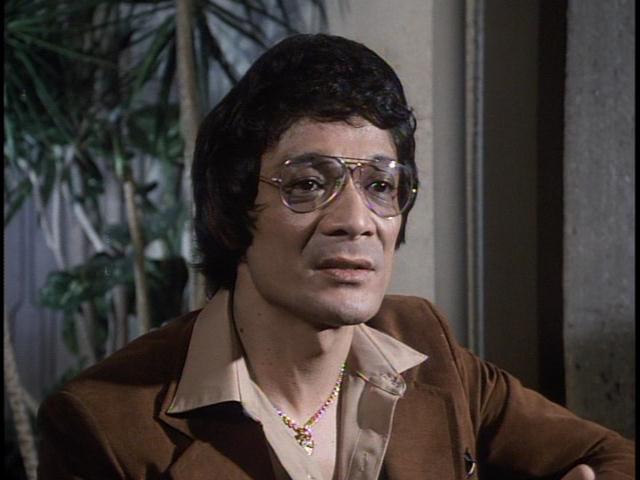 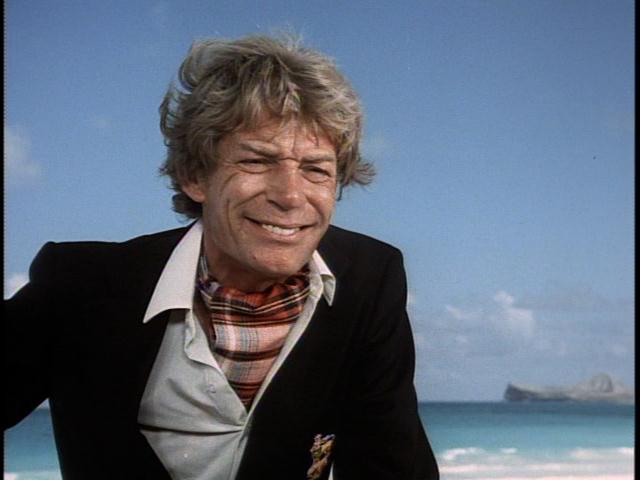 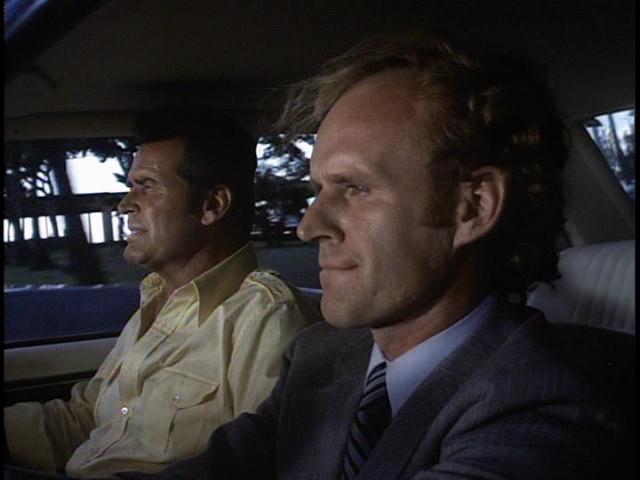 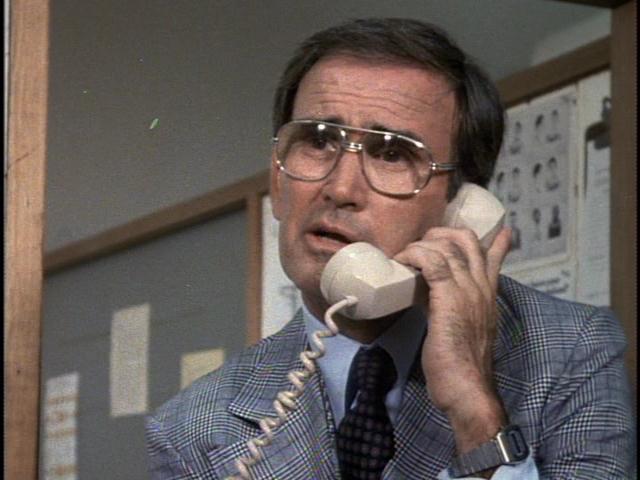 ABOVE PHOTO: Actor Jack Garner, James Garner's older brother played LAPD Capt. McEnroe. Poor Jack was left behind in Los Angeles as most of the crew were in Hawaii.
Jack Garner passed away in 2011. 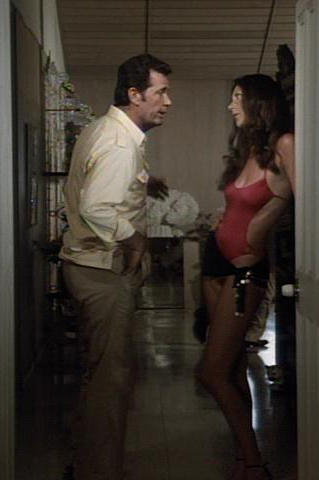 ABOVE PHOTO: The very sexy and beautiful Julie Blissett played Mrs. Ingram. You have to hand it to the 1970's for some of the hottest womens clothing ever. 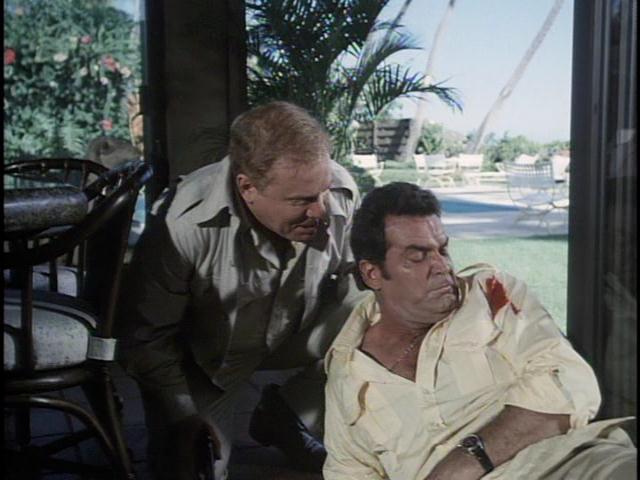 ABOVE PHOTO: What's a Rockford Files TV Episode without Jim Rockford being shot. All is well...Just a flesh wound! 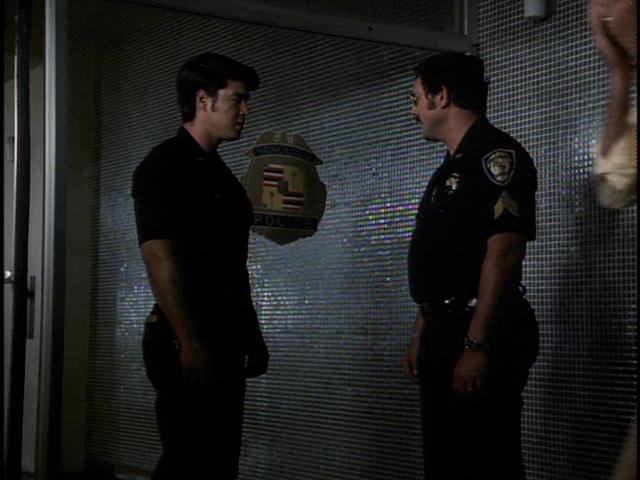 ABOVE PHOTO: I am guessing that these are two real Honolulu police officers from the late 1970's. Any viewers out there who may know these two Honolulu uniformed police officers?
Please let us know in the comment section or
RockfordLocations@live.com 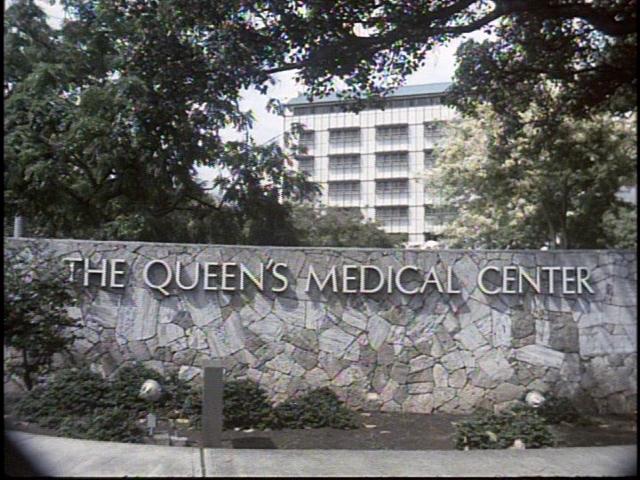 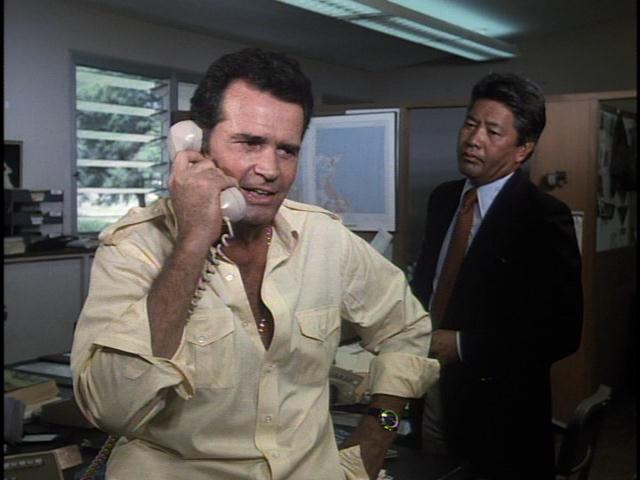 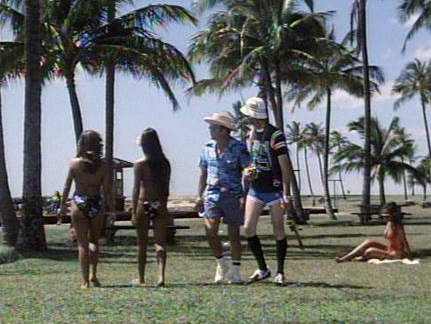 ABOVE PHOTO: Lt. Dennis Becker and Officer Billings walk past some bikini chicks. It appears they are staring at these two women as much as we are now.
Posted by Rockford Files Tv Show at 9:49 PM 5 comments: