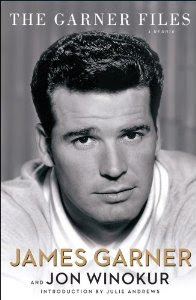 Actor James Garner pens a memoirJames Garner's memoir is as easygoing and plain-spoken as his acting persona. The Norman, Okla., native, now 83, obviously wouldn't have it any other way.

From Bret Maverick and Jim Rockford on TV — his two signature roles — to The Great Escape's Hendley The Scrounger and The Americanization of Emily's Charlie Madison, the hustler on the big screen, Garner has personified what he describes as "the reluctant hero." He's cool and calm on the outside, but deep down he's a good-hearted maverick. When pushed, he will shove back. He's particularly wary of bullies and bigots, and proudly recalls attending the March on Washington in the summer of 1963, and to this day remains "a bleeding-heart liberal."

Garner recounts growing up fast and hard in Norman during the Depression. In fact, "he was abused, lonely and deprived," as his wife, Lois, succinctly puts it. No wonder Garner (born Bumgarner) escaped to Hollywood after serving in Korea — but not to become an actor. He was just looking for decent, honest work. He fell into acting serendipitously when he ran into fellow Oklahoman Paul Gregory, a producer and agent, who signed him.

Garner had the good fortune to work with Henry Fonda on Broadway in The Caine Mutiny Court Martial (where, as a silent judge, he learned the craft of listening). Later, when actor/director Charles Laughton took over the production, he told Garner that he needed to overcome his fear of being bad. It was a revelation.

But stardom came to Garner on the small screen when he appeared in Maverick from 1957-60. The hit series turned the Western upside down with irreverence. Garner played the con artist with a sense of humor and a code of honor, and the image stuck.

He then honed his persona on the big screen in two World War II dramas: The Great Escape (1963) and The Americanization of Emily (1964). Although the popular Escape is best known for Steve McQueen's famous motorcycle jump, the dramatic highlight is the tenderness displayed between Garner and Donald Pleasence.

Meanwhile, Emily deservedly remains Garner's favorite film, about a coward who ironically becomes a hero. Co-starring Julie Andrews, who also reached new dramatic heights, the brilliant but unsuccessful anti-war drama was scripted by the great Paddy Chayefsky, who had a poetic flair for dialogue.

"Audiences have come around to it, and it's now a cult favorite and a minor classic," Garner says. "Unfortunately, it hasn't put war out of style."

And, unfortunately, Garner is a little too hard on himself about his best scene (a 12-page speech against sentimentalizing war).

However, The Rockford Files (1974-80) embodies everything that Garner represents. His iconoclastic and likable private eye survives every crisis thrown his way. But Garner's devotion to the successful Rockford was more than just an acting job: He also produced it with his own company. Fittingly, it's the highlight of this memoir as well as his career.
Posted by Rockford Files Tv Show at 8:00 PM

I agree about the tender moments between Garner and Donald Pleasence being the highlight of The Great Escape. It's too bad that many of those moments ended up on the cutting room floor to make time for McQueen's endless motorcycle chase - at McQueen's insistence. Director John Sturgess even apologized to Garner for it. Oh well. Sure would like to see those scenes though.